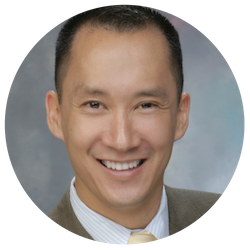 Dr. Yeung is currently board-certified in Obstetrics and Gynecology and is a Fellow of the American College of Obstetricians and Gynecologists.  He received his medical degree from Queen’s University in Kingston, Ontario, Canada in 2000 followed by a residency in Obstetrics and Gynecology at Georgetown University in Washington, DC.  He completed the fellowship in Minimally Invasive Gynecologic Surgery (FMIGS) – co-sponsored by the American Association of Gynecologic Laparoscopists (AAGL) and the Society of Reproductive Surgeons (SRS) – at the University of Louisville.  He completed further advanced training in the laparoscopic excision of endometriosis at the Center for Endometriosis Care in Atlanta, GA.

Dr. Yeung is a Certified FertilityCare™ Medical Consultant, and has established a NaProTechnology™ clinic at Saint Louis University, for patient care, resident and student education and research.

Dr. Yeung is Past-Chair of the Endometriosis/Reproductive Surgery Special Interest Group (SIG), and a member of the World Endometriosis Research Foundation (WERF), a global network created to produce high-quality multi-center research on endometriosis. He has published numerous original and review articles on endometriosis and minimally invasive surgery, and has received several distinguished AAGL awards, including the Jay Cooper Endowed Best Paper on Minimally Invasive Gynecology.  He has spoken at AAGL conferences both nationally and internationally and is regular faculty at training courses across the nation.

His clinical and research interests include the investigation of biomarkers for endometriosis, minimally invasive surgery, the surgical management of endometriosis, and adhesion prevention.

Most importantly, he and his wife (who had Stage IV endometriosis) have four children.

VitaeCME, bringing the best of
Life Giving Learning to Medicine